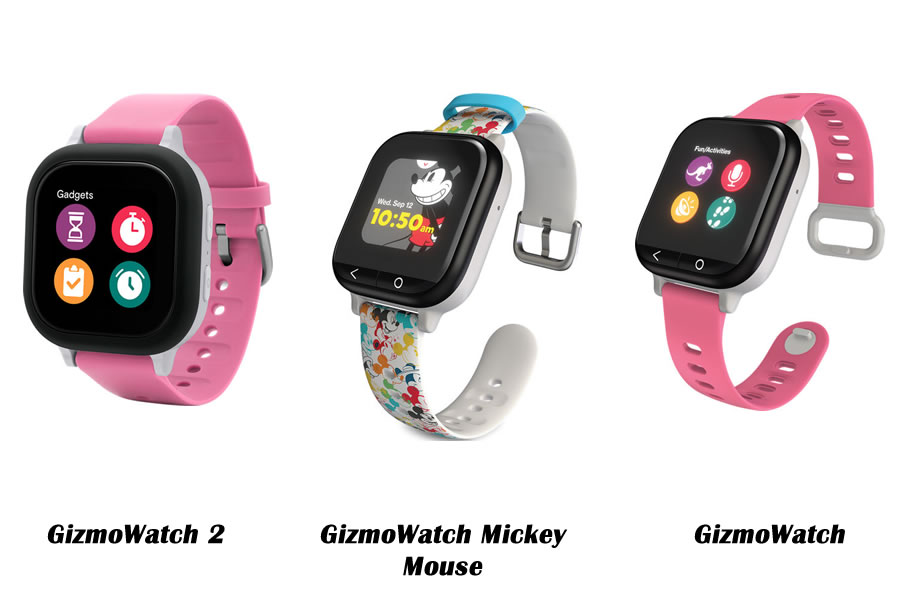 Verizon is one of the biggest companies in America today, so obviously, a discussion about smartwatches wouldn't be complete without us reviewing the best Verizon smart watches for kids.

Verizon offers a bunch of kid-friendly wearables, and in this article, we'll be trying to help you decide which one is the best fit for your child.

In the article, we'll also be talking about some kid smartwatches that Verizon no longer supports, so we didn't include them in the table. We'll also discuss the Verizon GizmoWatch Mickey Mouse Anniversary Edition, which is the same as the regular GizmoWatch, so again, it didn't get a mention.

If you are in a hurry, here is a quick list of our top picks.

In this section, we'll be focusing on the two Verizon GizmoWatches, as those are the only ones designed specifically for kids. Both GizmoWatches bear the LG logo, so you know you're getting a good quality product.

The original GizmoWatch comes in either pink or blue and has all the features your child might need. It allows you to track them through GPS and keep in constant contact with them through messaging and two-way calling. It holds up to 10 contacts that you need to install so that a stranger can not randomly call your child.

It also works as a step counter and allows you to program reminders and goals, so that your child knows when they have a core to do.

According to the Verizon store, it has a $180 initial price and can be paired with their basic $5/month plan.

A few customers complained about the battery life and drew attention to the fact that you need to be careful with the charger. It's proprietary and very difficult to find a replacement.

Tip: Alternatively, you can opt for the Mickey Mouse Anniversary Edition, which has the same features as the original Gizmo.

The GizmoWatch 2 is the new and improved version. According to users, it corrects some of the original Gizmo issues, improving battery life and screen size. It is also lighter than the original, making it more suitable for a child's wrist.

It allows you to track your child and connect with them through calls or messaging. However, it does not connect to the Internet, so you don't have to worry about distractions.

It also lets you set a geofence (meaning it will sound an alarm if your child leaves a certain set area.

The GizmoWatch2 is IP67 resistant, meaning that it is completely dust-proof and resistant to splashing and other water exposure that might occur (your child should not take it in the shower, though). This is an improvement from the original Gizmo, which was not dust-proof.

The retail price is $100, oddly enough (since it's cheaper than the original Gizmo), and works with a $5 monthly plan.

A few parents seem to have had trouble with the tracking function. It appears that only one parent/device can track the child (so your partner won't be able to). Also, some pointed out that the tracking was not in real-time.

Gizmo seems to be the newest, best option for a Verizon GPS watch for kids to track and entertain your child.

Further Reading
This article is for you, if you are looking for a waterproof smartwatch for your kid.

Below, we discuss some smartwatches that cater to older children/teens. They are designed for adults officially, so they are not smartwatches with GPS tracking built-in for kids. They are supported by Verizon, however.

Tip: Beware that there may also be a $20-$30 activation fee when adding any of these watches to your Verizon plan!

If you are in a hurry, here is a quick list of our top picks.

Since it's an adult smartwatch, the Samsung Galaxy Watch has more features. It allows you to connect to the Internet, get social media notifications, listen to music on Spotify, track your workouts, as well as call and message with whom you like.

As far as a parent is concerned, it gives you far less control, yet it's a more engaging device for a teen.

The Galaxy Watch can be bought at a retail price of $300, or in monthly installments of $12.49 (for two years), and can be added to your Verizon account on a basic $5 plan.

Another excellent option for an older child, as it allows notifications, messaging, calls, etc. It gives the child enough freedom and is excellent if your child has been known to misplace their phone quite a lot.

It also allows you to keep in contact with them, whenever necessary. It's also appropriate for swimming and showers and has extensive fitness tracking, so it might goad your child to exercise more.

The Apple Watch 3 is an improvement from the 3, as it's notably faster, although both seem to have pretty poor battery life. Other than that, it has pretty much the same features, with a considerable spike in price.

Further Reading
Does Sprint have a smart watch for kids? Learn more about how to track your child if you are on Sprint's Network.

Below are a few Verizon watch phones that the company used to support, but no longer does. I include these because there's a good chance you might see them mentioned on other websites.

The LG GizmoPal 2 was a basic, Verizon tracking watch for kids that the company dropped in late 2019, along with its CDMA (3G) network. It allowed basic functions, like calling and messaging, but little else.

The LG VC200 Gizmo Gadget was another basic Verizon device for kids. It allowed them to call a limited number of contacts and send and receive messages with them. It also allowed parents with real-time GPS tracking. Now, it's mainly sold as a refurbished gadget, and customers do not seem able to connect with Verizon, so we would not recommend it.

Tip: When shopping for a smartwatch, avoid those labeled 2G or 3G, as many carriers no longer support those networks, and the ones who still do support them will drop them within the next year or two.

According to the manufacturer, no, TickTalk 3 is not compatible with Verizon.

No, it does not. Unfortunately, the Doki services will be terminated as of July 1st, so the device won't be able to access service.

The GizmoWatch is best for children between the ages of 3 and 11 years old.

We recommend either the original Verizon GizmoWatch or the GizmoWatch 2. If buying for a small child, the Mickey Mouse edition might be a nice idea. We recommend these two because they are built for kids, have a kid-friendly design, and are safer (e.g., they only allow limited contacts and allow you to track your child's location).

If shopping for an older child/teen, the Gizmo will be too childish, so consider the Samsung or the Apple watches, but the Gizmo should be a fine choice up to 10-11 years old.