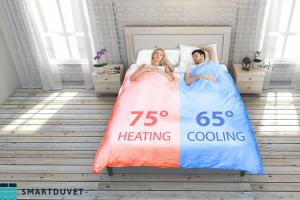 The idea behind the new Smartduvet is exactly what it sounds like: smart. How many times have you argued with your sleeping partner because one of you was too cold while the other was too hot? What about arguments over who was supposed to make the bed?

The Smartduvet may be able to solve both these common, everyday problems in one fell swoop.

SmartDuvet - The Duvet of the Future

The Smartduvet is an ingenious heating, cooling, and bed-making system that works inside the duvet you already own. So if you're really attached to your duvet, you can keep using it with this system as long as it has a duvet cover that can be unzipped.

The Smartduvet allows the temperature on different sides of the bed to be controlled completely independently from one another. One side can be heated while the other is cooled.

The heating and cooling effects are produced by a box that sits under the bed and is connected to the Smartduvet by a small fabric hose. According to the company, the control box makes less noise than a table fan while working.

Imagine never having to spend time making your bed again!

The Smartduvet can also make your bed by rolling the duvet and underlying top sheet back into place after you've gotten up for the day.

Both the temperature control and bed-making functions of the Smartduvet are controlled by an app, which is currently available for Apple and Android smartphones. The app allows you to control the airflow and temperature on each side of the bed, as well as set when you would like the Smartduvet to make the bed for you each day.

There are several steps to setting up the Smartduvet, but none of them are very complicated. You must simply remove your duvet from the duvet cover, attach the Smartduvet on top of your duvet, and put the duvet back inside the cover.

After that the hose to the control box must be plugged into the Smartduvet and, if you want to use the bed-making function to its fullest potential, you must use the "Smart Attach System" to join the duvet cover to the top sheet.

The Smartduvet technology works via a grid of fabric air chambers. The outermost chamber is used for the bed-making function. When it's time to make the bed, pressurized air is pushed into the outermost air chambers, causing them to expand.

Just as a soccer ball returns to its original shape when inflated with air, even if it was flattened or dented, the filling air pockets cause the duvet to return to its spread out and flat position.

The Smartduvet comes with a "Smart Attach System" which allows you to connect the duvet cover to your top sheet so that when the duvet returns to its intended position, the top sheet will move with it.

Inside the larger, bed-making air chambers are smaller air tubes that carry the heated or cooled air throughout the Smartduvet.

Just like the heater in your house that blows hot air, the control box attached to the Smartduvet blows electronically heated air through the channels in the duvet. This warms the duvet and creates a very dry and cozy feeling under the blankets.

The cooling system of the Smartduvet works very much like a swamp cooler. Instead of cooling air via compressors and refrigerants like an air conditioner, the Smartduvet utilizes the quieter and more energy efficient method of evaporative cooling.

When water evaporates from a surface, it takes some heat and energy with it, which is why humans sweat to cool themselves down. By increasing the airflow through the tubes in the Smartduvet, the rate of evaporation is increased and creates a cooling effect.

It should be noted that, like a swamp cooler, this type of cooling will work best in dry climates and could lose much of its efficiency in very humid areas.

Since the Smartduvet is still a relatively new product, it is not yet available on Amazon or other major online retailers. As of the writing of this article, the Smartduvet can currently only be pre-ordered from the Indiegogo page or the Smartduvet website.

Supporters of the Indiegogo campaign lucked out and were able to buy any size of Smartduvet for only around $200. For the rest of us, a twin sized Smartduvet can be pre-ordered for $280 and a queen sized for $330. A king will set you back $350.

The product can currently only be pre-ordered because mass production of the Smartduvet only began after the resounding success of the Indiegogo crowdfunding campaign. Smartduvets first began shipping out about eight months ago, and the company is still working to supply pre-orders from the Indigogo campaign.

Once the Smartduvet company is caught up on pre-orders and manufacturing is fully established, the Smartduvet will likely have a much faster turnaround time between placing an order and shipping. However, for the moment, it will take you quite some time to receive your Smartduvet if you choose to order one.

Since this product is currently in such high demand, it may eventually become available from more major online retailers like Amazon. The product ships internationally and comes with an appropriate power adapter for the country it is being shipped to, so it can be easily used in most countries.

Further Reading
The Best Bed Cooling and Heating Systems of 2019

Choose From a Variety of Bed Cooling & Heating Systems

The Bedjet is similar to the Smartduvet in that is uses blown air to change the temperature, but the Bedjet simply blows air under the mattress rather than being enclosed in the duvet. Both sides of the bed can have independent temperature control with the Bedjet if two units are purchased.

The Bedjet is also controlled by an app and comes with additional Biorhythm Sleep Technology, which allows the temperature to be programmed for "every hour of the night."

The Bedjet is able to heat up to 109 degrees Fahrenheit, but the company does not give a guarantee on how low the Bedjet can cool as it depends on the ambient bedroom temperature.

Both released by Chili Technology, the Oooler and chiliPAD Cube are both mattress pad heating and cooling systems that are water-based rather than using air like the Smartduvet and Bedjet. The Oooler is a more advanced version of the Chilipad Cube and comes with a programmable app, and many other features.

The water-based nature of these products comes with both positives and negatives. On the one hand, the temperatures that can be achieved by these products are less dependent on the ambient air temperature. On the other hand, it can take up to 30 minutes for these systems to reach their desired temperature because the water takes time to heat up or cool down.

Both the chiliPAD mattress cooler and Oooler have versions that allow independent temperature control for two sides of the bed.

Overall the Smartduvet is a promising new product in the arena of bedroom temperature control. Using the duvet itself as the method of heating and cooling and adding the additional bed-making feature set this product apart from other air-based systems like the BedJet.

The Smartduvet can be a useful option if you want temperature control of both sides of the bed at an affordable price, or if you really hate making the bed and want a duvet that will do it for you.