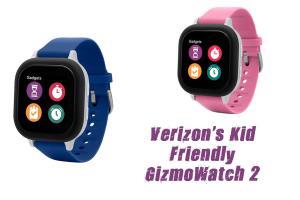 Our Gizmowatch 2 review comes about due to all the increased demand for smartwatches for children to satisfy both the parents and their offspring. The Gizmowatch 2 from Verizon is easily one of the most recognizable names on the market of kid smartwatches, and in this review, we'll help you figure out if it's right for you.

What Is the Gizmowatch 2: A Brief Description

The Gizmowatch 2 is a fairly basic smartwatch explicitly designed for children, and offered by Verizon (hence it's only supported on Verizon). Many parents resort to smartwatches for children who are either too young or too scatterbrained to be trusted with a full-blown smartphone's responsibility.

A smartwatch like the Gizmowatch 2 allows the child to perform a few essential functions, such as calling or sending messages, and allowing the parent to keep an eye on their offspring through GPS.

This Verizon Gizmo watch for kids can be an excellent choice if you are a Verizon client already and are looking for something to fit into your monthly plan (the Gizmowatch 2 can be added for as little as $5 a month!).

At the time of this writing, the Gizmowatch 2 is available in 2 colors, blue and pink, thus catering to a wide and varied audience. In terms of design, the screen is relatively small and quite basic, and the watch itself is lightweight, making it a right choice for younger kids, as well. While a few people have complained of a pretty low-quality wrist band, this can be replaced, in a pinch, so that shouldn't be a major issue.

But since you're likely buying a smartwatch not necessarily for its looks, but for the smart features it offers, let's talk a bit about that.

Easily the most crucial feature for most concerned parents is the live tracking through GPS. Through this function, you can connect the child's watch to your own smart device, and get updated on where they are throughout the day. This is particularly useful if kids are of school-age or spend a fair bit of time on their own or with friends.

Some clients have noted that the GPS tracking done by the Gizmowatch 2 is not actually in real-time (in the sense that it's a bit laggy), but at the same time, several parents loved it. So, I'd say the truth lies somewhere in the middle here. Considering Verizon's reputation, we're willing to trust the Gizmowatch 2 as an accurate and fast GPS tracker.

Geofencing is really just another aspect of GPS tracking, and many parents prefer their child's device to have a geofencing option as well, as it's particularly useful. Geofencing allows you, the parent, to set up a certain radius that the child is supposed to be in.

For example, if the little one is at school, you will set the school and the immediate surrounding area. However, if the child leaves that set area, you will immediately receive an alarm informing you of this. Such a function is obviously really useful for parents concerned by kidnappings or just the child getting lost. With geofencing, that's much less of a problem.

The Gizmowatch 2 also allows two-way calling with up to 10 contacts that you set beforehand. The calling ability itself helps you keep in touch with your little one, and also lets them reach out to family, if necessary. However, the 10 contact limit (and the requirement that the contact is pre-programmed into the device) helps keep your child safe from strangers and potential predators.

One aspect that some parents were a little bummed about was the lack of FaceCalling (since the device does not have a camera), but as a basic way to keep in contact, the Gizmowatch 2 works great.

The Gizmowatch 2 also permits messaging with the 10 contacts, but only offers a limited set of pre-set texts. Basic messages like “Where are you?” are pre-programmed into the device, and it also allows you to send voice messages, in case you need to get a more complex message across. Your child can send voice messages, as well.

The device also allows you to program little mementos for your child and sends reminders at the appropriate time to make sure the child is ticking off the to-do list. For example, if your child needs to get to soccer practice, you might call to remind them, but you can also program it into the Gizmowatch 2 directly, thus saving you some time.

Like many smartwatches made for children, the Gizmowatch 2 has an IP67 rating, marking it as water-resistant but not waterproof. A device with an IP67 rating can be worn, for example, when the child is washing their hands, as a light splash of water won't damage the watch.

However, make sure that your child takes off the watch before taking a bath or shower, as the Gizmowatch 2 won't support that.

Also, make sure your child doesn't swim with it still attached. Basically, any activity that would submerge the watch in water is a no-go.

Also, the IP67 rating means that the Gizmowatch 2 is dust-proof, meaning you don't have to worry about that.

One aspect that your child will no doubt appreciate is the customizable watch face. Your child can choose from seven different designs and alternate them whenever they like, so as not to get bored with their smartwatch.

8. Quiet mode (Do Not Disturb)

Since many parents are getting their children smartwatches to wear to school, you want to make sure it doesn't distract them during class. Luckily, the Gizmowatch 2 allows you to set a "quiet time" or a "do not disturb" so that if anyone calls or texts the child during class, the watch won't make a noise.

There are times when your child either can't hear the ringing or just won't answer. But the Gizmowatch 2 allows you to activate an auto-answering function that automatically puts you through after about 10 unanswered rings. It also captures surrounding audio, allowing you to hear what's going on around your child. This function is developed as a response to bullying and can help the parent know what's going on with their child.

The Gizmowatch 2 also works as a pedometer and basic fitness device that monitors your child's physical activity and helps you ensure they're getting enough exercise in a given day. What's more, this can also be fun for the child, especially if they see their parents monitoring their own physical activity on their own “grown-up” devices.

The Gizmowatch 2 can, if needed, also function as an alarm clock, allowing you or the child to set the alarm sound (you can also set the ringtone for the calling function!). It also doubles as a stopwatch.

This Verizon watch comes complete with some basic games - enough to keep the child entertained, but not so many that they will distract them from their other tasks or during class.

One notable lack of the Gizmowatch 2 is that it doesn't have a camera, unfortunately. So your child can't take pictures or record videos, which is something most kids want from their smart device. However, if that's not a significant issue for you, then it shouldn't stop you from getting the Gizmowatch 2!

How Much Control Do You Get?

For any smart device for children, an important issue is parental controls. Well, with the Gizmowatch 2, you don't need to worry about that.

Aside from the Auto Answer function discussed above, you also get to decide who contacts the child.

You can also choose such extras as ringtones for the child and access your child's text and call logs from your own connected device.

The Gizmowatch 2 doesn't support Internet access, so you don't need to worry about your child being distracted or exposed to inappropriate content.

Then, of course, there's the geofencing, which helps you keep your child secure at all times. All in all, the Gizmowatch 2 is a great choice both for the parent and the child!

Battery Life - What You Need To Know

From what I've been able to gather, you will need to charge the Gizmowatch 2 every night (or every morning), but considering that it's the same with most smartphones, I'd say that's not so bad.

How Much Does It Cost?

Price is another important factor in buying your child's first smart device. Most parents, understandably, don't want to spend a lot of money, especially when there's a risk their child might lose or damage the watch.

Luckily, the Gizmowatch 2 comes at a very decent price of just $100 from the original Verizon website, which is a great price for a GPS watch for children. Alternatively, you can opt for monthly payments over the course of 24 months, at just $4.16 a month.

Of course, in devising your budget, keep in mind the extra $5 for adding the watch to your Verizon plan. All in all, not a bad deal for a watch with this many functions.

So, what's so different, you might be wondering. Well, the main difference between Gizmowatch and Gizmowatch 2 is, interestingly enough, the price. While the Gizmowatch 2 sits at a nice $100, the original Gizmowatch goes for as much as $200 (Disney edition on the original website) or $180 (for a basic Gizmowatch on Amazon). Quite a big difference!

The Gizmowatch colors are the same for both releases (pink and blue), but another notable difference seems to be the battery life, which was much worse for the original Gizmowatch than for the new and improved one.

Incidentally, the Gizmowatch 2 also happens to have a slightly bigger screen size, which obviously a lot of children will enjoy. The original Gizmowatch also isn't dust-proof and so has a bigger chance of becoming damaged.

All in all, especially considering that the Gizmowatch 2 is cheaper and more advanced, I would suggest opting for that.

The Gizmowatch 2 has an IP67 rating that means it is water-resistant. It can sustain a splash, though it should not be submerged in water.

Yes, the watch comes with a few basic games to keep your child entertained for a short while.

The Gizmowatch 2 caters to children as little as 3 and as old as 11.

Conclusion - is the Gizmowatch 2 a good choice?

In the end, it really depends on what you want from the device, but as a first basic smart device for your child, the Gizmowatch 2 goes above and beyond. It helps them learn responsibility for smart devices, and enables you to keep in touch with your child, without being overbearing.

The Gizmowatch 2 offers the right amount of parental control and several entertaining functions that will make it a hit with your little one!