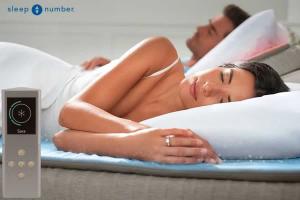 In this review, we will be taking a look at the “DualTemp Individual Layer” from Minnesota based bedding company Sleep Number.

Sleep Number DualTemp layer is a one inch thick, temperature-controlled mattress pad that allows the user to adjust the bed's climate and their own level of comfort. We will be looking at how it works to regulate your temperature through the night while you sleep and analyzing how effective it is in creating the perfect environment for a good nights rest and comparing it with a few similar products to see how it stacks up against its competitors

How Does DualTemp Layer Work?

The DualTemp layer uses active air technology. It works by using the room’s air temperature using a box placed under the bed or near the head to regulate its climate.

Because of this, the range of temperature will vary from home to home, and it would be unreasonable to assume that the Dual Temp will perform the same in California as it would in, for instance, Washington.

The DualTemp is most effective in more moderate climates, generally, around 68-72 degrees Fahrenheit, although users from warmer places like Florida and California have mentioned that they have found the pad effective.

Other users have brought up that Sleep Number's promotional material is a tad misleading when it comes to the degree of control the user has over the bed climate. Rather than being able to set the pad to a specific temperature, you only have three settings either side of hot or cold and that it's impossible to tell exactly what temperature the bed is at before you climb into it.

How Does It Look?

Since the DualTemp layer works by connecting a fan box to the mattress via a hose in order to provide the air that will cool you throughout the night, it is worth considering:

Divan owners have complained that since there is no space under the bed, the box needs to be placed at the side, which could present a trip hazard to anyone returning to bed after any 3 am escapades.

Definitely, something to consider if you're looking for a more discreet solution to your night time heating problems!

How does It Feel?

Now, while the reception of the Sleep Number Dual Temp is mostly positive, some users have complained that the mat isn't as ergonomic as it could be, and isn't quite as suitable to adjustable beds as it could be.

The pad is divided into two different layers, and you find yourself sinking into the division somewhat, creating the feeling that you’re sleeping on a camping mat rather than a comfortable mattress topper.

The design of the airflow system is top rate, however, creating a consistent, comfortable pocket of hot or cool air underneath the user, ensuring a restful night's sleep if you don't mind the gap between the temperature layers.

Other bed cooling products that will be covered in a bit more detail below avoid this issue by using jets of air between the sheets to cool the user, removing the need for a mattress pad entirely.

Easy installation is a huge plus point in favor of the Sleep Number DualTemp. You don't have to worry about tying yourself in knots with any fiddly installation, as Sleep Number can send out a crew to install your DualTemp layer for you.

However, if you do wish to install it yourself, then the process is actually quite simple. All you have to do is plug the fan boxes into the wall, and install the hose from the fan box, into the pad. You place the Dualtemp Layer under the fitted sheet. After that, it's a case of just programming the remote. Then the DualTemp is ready to go!

How long does it take to activate?

The length of time it takes for the DualTemp to Warm up/Cool down is dependent on the setting you have it on. A higher setting will take longer than a moderate setting. However, setting the DualTemp Layer twenty minutes before you get into bed for sleep is recommended by the manufacturer.

Does the DualTemp self regulate temperature?

The DualTemp mattress does not self regulate; instead, the user has a choice of 6 options from warmest to coolest, and the DualTemp will maintain a constant temperature throughout the night based on the setting you have chosen.

What temperatures can the DualTemp reach?

The temperature of the DualTemp cannot be set to a specific level the same way you would a thermostat; the pad’s temperature is dependent entirely on the setting you have chosen, and your bedroom’s climate.

How much energy does It use?

On its highest settings, the Sleep Number DualTemp consumes around 2.2 Kilowatts per hour. However, there is an automatic shutdown option for those that would like to reduce their power consumption.

Functionality and Ease of Use

In theory, the DualTemp mattress is incredibly simple to use, as mentioned above, each pad comes with a control with six settings from warmest to coldest, and the product doesn't have any complex features beyond this and an automatic shutoff to reduce power consumption.

However, unfortunately, there are issues with the remote binding between the control and the fan box; if you only have one pad, this isn't too much of a problem, however, users have reported that when you have two pads and two remotes, your remote will connect to either one seemingly at random.

There have been reviews from users regarding the hose's position in the middle of the pad, and how this gets in the way when you get in and out of bed. Not only does this present a comfort problem, but it represents a risk of significant wear and tear on a vital part of the product, which could lead to some issues later down the line.

Other users have experienced issues with the pad slipping if only one is being used on a king-sized bed. Unfortunately, the only way to remedy this issue is to get a second DualTemp Layer for the other side to balance it out, and at $799 each, this is not a cheap fix.

SleepNumber DualTemp comes with a one year limited warranty.

Now, the DualTemp isn't the only climate-controlled bedding solution for sleep, and there are alternatives out there on the market.

Perhaps the most similar like for like product out there at the time of writing is the "BedJet", a climate control system that allows the user to regulate the temperature of their bed by utilizing blasts of heated or cold air between their bed sheet, rather than a pad below the user.

At the end of the day (no pun intended), it’s really all down to personal preference as to what you would feel more comfortable using, and whether or not you could grow accustomed to the physical sensation of sleeping on a mattress pad.

Alternatively, there are also water-cooling based systems on the market which offer a more precise method of temperature control than air-based systems like the Dualtemp or the BedJet at a more affordable price (a half queen chilIPAD will run you up a bill of around $499, whereas the Dualtemp Half Queen will cost you about $799). When it comes to combining water with electronics while you are in sleep some might be hesitant; however, it should be mentioned that all these products are tested thoroughly and absolutely 100 percent safe.

In summary, DualTemp mattress pad is a product that many people are happy with, but not without its problems.

To cover both sides of a queen-sized bed, you would be spending around $1600 for two Sleep Number pad, which many would agree is a hefty price for a mattress pad, especially when other air bed systems like the BedJet V2 come in at $1129 for their dual system.

Personally, I feel that the main issue here is the price tag in comparison to other products on the market. Compared to a product like the "Eight Sleep Pod" – a climate-controlled mattress with extra features like smart home integration and sleep tracking – which costs $2300, the $1598 price tag begins to look very very steep for a product with both comfort and functionality issues.