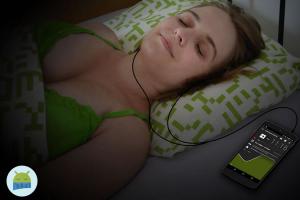 In our review of Sleep as Android, we explore the primary offerings of the app, as well as a variety of features. Explaining the technology behind the app's functions, we delve into Sleep as Android's support for wearables in addition to the app's integration with multiple applications and devices. In a separate discussion, we talk about the best sleep monitoring gadgets, which are not apps but rather devices that monitor sleep.

What is Sleep as Android?

Urbandroid’s Sleep as Android is an optimal sleep app helping users manage sleep via a variety of features by way of a smartphone, as well as by optional wearables and an optional smart light. The app reminds users of bedtime, tracks sleep cycles, and uses the sleep cycles to gently wake users during an ideal part of the cycle.

Assisting users with bedtime lullabies or sounds of nature, Sleep as Android helps users both fall asleep and wake up. In addition to the sounds of nature, the app also leverages CAPTCHA verification, a QR code, or NFC tag to help users get out of bed in the morning.

While the app makes use of actigraphy, a method to measure movement, to track your movement while sleeping with your phone in your bed, you also have an option to keep your phone on your bedside table. With sonar-tracking, Sleep as Android doesn't require the smartphone to be in the bed.

Keeping a sleep score, the app offers advice if the user’s sleep is at a deficit. With sleep-talk recording, snoring detection, and anti-snoring noises, the app actively monitors sleep and the side effects of sleep throughout the night.

Integrating with both wearables, such as Pebble and Wear OS, and music, such as Spotify and Play Music, Sleep as Android allows users to combine efforts in both sleep and lifestyle goals. In addition to integration, the app accommodates life outside the home with jet lag prevention.

Does Sleep as Android Really Work? If So, How?

Sleep as Android measures your sleep with a method known as actigraphy, a non-invasive approach to monitoring rest and activity cycles. Actigraphy requires an actigraph unit, or actimetry sensor, to measure movement. Health professionals have used this technology since the early 1990s to diagnose sleep disorders. We have also outlined how sleep apps and sleep tracker devices work in more detail if you want to know more about the science behind the sleep tracking technology.

When we enjoy deep sleep, our muscles are essentially paralyzed, causing the Sleep as Android sleep graph to read as flat. When we enter light sleep, we start tossing and turning, causing the app to display peaks on the sleep graph.

Your REM sleep phase is estimated using statistical analysis. The first half of your light sleep is considered your REM sleep, following a significant deep sleep phase.

Sleep as Android uses your sleep graph to implement its “smart wake up” feature, waking you during your ideal light sleep, as well as to create your sleep score.

Sleep as Android integrates with a variety of apps, smartwatches, wearables, and even smart light bulbs for a variety of features.

Does Sleep as Android Integrate with IFTTT?

Sleep as Android integrates with IFTTT. Automate your IFTTT services to trigger when sleep tracking starts, stops, pauses, or resumes. You can also set IFTTT services to trigger when you receive your bedtime alert, when your alarm alert starts, and when you dismiss your alarm alert. There are numerous combinations of your Sleep as Android app features integrating via IFTTT.

To wake up to a simulated sunrise, you can use a light-only alarm, which slowly increases the brightness to awake you. Starting with a red of minimum brightness and moving up to a yellow of maximum brightness, your Sleep as Android supports both the Philips HUE and Philips HUE lux.

You can also use your smart light when you pause sleep tracking to visit the bathroom in the middle of the night. Plus, you can cue lucid dreaming with your smart light.

Your phone only needs to be less than two feet from your body to detect your movement during sleep, thereby detecting your sleep cycles. At this range, Sleep as Android’s sonar can also measure your breathing rate.

While sonar works by sending a sound signal, the sound is barely audible to humans. It is the equivalent to the sound of a running refrigerator.

Questions about Sleep as Android

Sleep as Android triggers common questions about the functionality of the sleep app.

How Do I Use Sleep as Android?

Once you’ve downloaded the Sleep as Android app, you can get started by setting your alarm. In the top right, click the + icon to set the alarm. Automatically the app’s smart wake up will determine the ideal time to wake you within 30 minutes leading up to your selected alarm time.

After your alarm sounds, you can see your sleep phases and your deep sleep percentage. Beyond these basics, you can also view Sleep as Android statistics, read its sleep advice, listen to noise recording, turn on snoring detection, fall asleep to lullabies, and participate in lucid dreaming.

Which Wearables Does It Support?

Sleep as Android supports smartwatches, allowing you to use your smartwatch to track your movement and heart rate versus keeping your phone in your bed. For Pebble and Wear OS, you don’t need an add-on.

The app also supports standalone heart rate monitors that use the Bluetooth Smart Heart Rate Profile. Because there is not a Bluetooth standard for motion data, Sleep as Android uses API support to integrate with smartwatches and bands tracking movement.

Sleep as Android supports Happy Electronics StressLocator pulse oximeters to measure your blood’s oxygen level. Urbandroid lists the devices the app supports on their website, and if your device is not on the list, they provide an API that allows third parties to integrate with your device.

Will Sleep as Android Integrate with My Fitbit?

Urbandroid, maker of Sleep as Android, is currently working to integrate FitBit Ionic and Versa with Sleep as Android. Beta testers and the Urbandroid developers are actively updating the status of the FitBit integration on their forum post.

Is Sleep as Android Free?

For the first 14 days of use, your Sleep as Android is free, and you are free to explore all of its features. After those 14 days, you are still able to use the app for free, but the sleep tracking will only work every other day.

If you wish to purchase the unlimited app, the price is less than $10. With that price, you’ll receive daily sleep tracking, data imported from an SD card, 10 lullabies, and 6 ringtones.

How Much Battery Does Sleep as Android Use?

What is the Sleep Mask for Sleep as Android?

The Sleep Mask for Sleep as Android is a mask made of soft cotton, USB-connected to any OTG Android device. The mask uses light to play lullabies, helping you fall asleep faster and mimics a sunrise to serve as your alarm, glowing from low red to full yellow. Providing enough comfort to wear through the night, the Sleep Mask also features lucid dreaming prompts and anti-snoring triggers.

How does Lucid Dreaming Work with Sleep as Android?

If you want to experiment with lucid dreaming, the phenomenon in which dreamers become aware that they are dreaming and actively participate in and even direct their own dreams, Sleep as Android offers audio cues to induce lucid dreaming.

By setting the number of repetitions, you can use Sleep as Android to trigger lucid dreaming. By playing the cues toward the end of the deep sleep phases when you will most likely be dreaming, the app primes you to at least attempt to participate in your dreams.

How Does Awake Detection Work?

You can also actively participate in Sleep as Android’s awake detection by using the tracking pause feature when you’re not sleeping. By pressing the pause button on the tracking screen or by enabling the volume and camera button effect, you can add five minutes of pause whenever you’re awake.

Sleep as Android uses two additional methods to detect when you're awake. First, heart rate tracking provides the exact app data regarding your awake time. Your heart beat can be 10 BPM slower when you are asleep versus when you are awake, providing the app a standard by which to measure your asleep state.

By using heart rate, the app can identify awake and asleep states. Your Sleep as Android app supports most Bluetooth heart rate devices and smartwatch sensors.

Second, by using light level, Sleep as Android leverages your smartphone’s lux sensor, which measures the ambient light in your bedroom. Once you’ve enabled awake detection, the app measures light during sleep tracking.

Your sleep graph will plot the light level, similar to the plotting of your heart rate and breathing. Measured against the light in your room during sleep, your light level plot will indicate awake periods. In other words, if you normally sleep in total dark, and you turn on a light, Sleep as Android will track that as an awake period.

What Do Users Think of Sleep as Android? Are There Any Common Complaints?

Sleep as Android does require add-ons to integrate properly with companion apps. Plus, the app requires updating of these add-ons and companion apps. Without installing the latest versions, some integration simply stops working.

Users must install the most recent add-on on both the companion app AND the wearable’s companion app. Otherwise, Sleep as Android won’t sync.

Users can hear the sonar tracking on some devices. Sonar doesn’t work with headphones. You won’t be able to listen to lullabies privately with headphones before falling asleep if you want to use the sonar feature.

As mentioned above, Urbandroid is still working on the FitBit integration. They are also working to become a pre-selected partner for Samsung’s Gear Fit 2, which currently doesn’t allow outside parties to integrate.

Sleep as Android in Closing

Assisting in falling asleep with lullabies or waking up with sounds of nature or increasing light, Sleep as Android provides a sleep score, offers talk recording and snoring detection, and helps with anti-snoring. Preventing oversleeping with CAPTCHA wake up verification, the app has a variety of methods to wake you up.

With additional features like jet lag prevention and sleep respiration tracking, Sleep as Android is an app of numerous combinations for all aspects of sleep tracking.

Is the SleepRate App the Sleep Tracker for You?