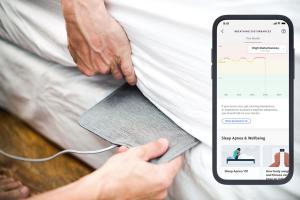 The Withings sleep tracking mat, formerly called the Nokia Sleep, is a thin pad full of sensors that fits underneath your mattress. The mat is able to detect your heart rate, movement patterns, and whether or not you're snoring. This information is then used to deliver an in-depth sleep report, which tells users how much time they spent in deep, light, and REM sleep.

The Withings sleep tracking mat has proven to be an excellent sleep tracking solution for those who would rather not wear a wristband or other wearable devices to bed. Recently the company improved their product even further by adding a breathing disturbance tracker to the Withing's Health Mate app.

For more information about the Withings sleep tracking mat, read our detailed review of its features and usefulness.

You may be wondering, why is it so important to track breathing during sleep? The answer is: sleep apnea.

Sleep apnea primarily occurs when the muscles and soft tissue of the upper airways relax after you fall asleep and obstruct airflow through your throat. This can lead to common sleep symptoms such as snoring, night sweats, frequently waking up during the night, and gasping while asleep.

While these symptoms may seem mostly innocuous, over time, they can lead to serious complications. People suffering from sleep apnea are at higher risk of cardiovascular disease, depression, and diabetes, along with other conditions.

Since up to 80% of people with sleep apnea don't realize they have it, an app that can detect early warning signs of the disease could have a huge positive impact on user health.

An App That Tracks Your Every Breath

The new Health Mate app update allows the Withings sleep mat to detect both the timing and intensity of breathing disturbances. The system can recognize your unique sleep breathing patterns and notices when they are interrupted and for how long.

The app will know how fast you're breathing and whether you stop breathing in your sleep. An algorithm then analyzes this breathing information along with records of snoring patterns, heart rate, and movement during the night to determine whether you're showing signs of sleep apnea.

The app can then make recommendations about whether you should seek medical attention for a possible sleep apnea diagnosis. Health Mate also offers access to sleep coaching tools, which can also help users combat sleep apnea through lifestyle changes such as a better diet and increased exercise.

As with any product, Withings is quick to remind users that the information provided by the Withings sleep mat app is not an adequate substitution for the opinion of a trained medical professional. If you think you may be suffering from sleep apnea, you should first see your doctor, rather than relying on a piece of sleep tech.

It's also important to remember that snoring and sleep apnea are not the same thing. Doctors estimate that only 1 out of every 5 people who snore also suffers from sleep apnea.

However, Withings is currently working on an even more advanced suite of sleep apnea detection features for their app. If the FDA and CE clear this new update, Withings is planning to release it near the end of 2019.

Where can You Get Withings Sleep?

The new app update is free for anyone who already owns a Withings sleep tracking mat. The mats are available on the Withings' website and from Amazon for $99.95. Compared to the cost of other sleep tracking systems, this is relatively inexpensive considering all the advanced tech and features that come with it.

The new breathing disturbance detection features of the Withing sleep tracking mat are impressively unique among the sleep tracking industry and serve to further distinguish this product from its competitors.

Not only is the Withings sleep tracking mat one of the few sleep tracking products that doesn't require any type of wearable technology, but it can also now point out early warning signs of a difficult to detect illness.

If you are interested in a sleep tracking system that doesn't require wearing anything, or if you have a history of sleep apnea or other breathing problems, the Withings sleep tracking mat and accompanying app would probably be a worthwhile investment for you.