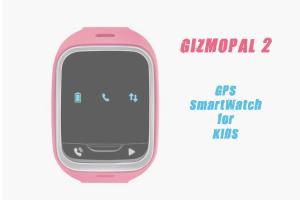 The GizmoPal by LG has long been a name in the children's smartwear industry, and while the GizmoPal 2 has been discontinued, it's still a highly coveted item, so here's our GizmoPal 2 review. Several secondhand buying options are available online, so we decided to offer you a more in-depth view of what the GizmoPal can do for you and your little one.

A Look at Design…

First things first, what does the GizmoPal 2 look like? Immediately, children are taken with the Gizmo design. The watch has a small and sleek touchscreen that will allow your little one to access all the GizmoPal 2 features (which we'll talk about below). It also has a dedicated “call” button, to make it that much easier for you to keep in contact with your child, as well as a special “Start” button.

The GizmoPal 2 comes in two different color variants: blue and pink, both cheerful and easy to fit into a wide array of personal styles. The band is sturdy, although some parents have noted that it can be a bit stiff. While the GizmoPal 2 is lighter than other Gizmo devices, some say it's still a bit difficult for younger (3-5-year-olds) children to wear and that it can be a bit bulky.

Does the Gizmopal 2 Allow GPS Tracking?

Most parents look for smartwatches for their children so that they can monitor their location throughout the day. With that in mind, the GizmoPal 2 was designed with a built-in GPS tracker. A GPS tracking system will allow you to know where your child is at all times and in real-time.

On LG's official website, it states that up to 4 caregivers can connect to the device, so it seems that you'll also be able to share the child's info with relatives or babysitters. This may come in particularly handy if you share parenting and care duties with someone.

Aside from GPS, it's also nice if the child's smartwatch has some essential smart functions, both for your peace of mind, and for the child's entertainment. Because of the below basic functions, you can safely buy a GizmoPal 2 watch for those children who want a smartphone but are still a bit young to be trusted with one. GizmoPal 2 offers a taste of your average smartphone but toned down a bit for children.

It's important to note that the GizmoPal 2 does NOT connect to the Internet. This may be a bonus point for some parents since it means their child will be exposed to fewer distractions during school hours.

A must-have feature for many, the GizmoPal 2 allows 2-way calling between the tracking device and the watch. And since the Call button is obvious on the watch's screen, it is easy even for smaller children to keep in contact with their parents. The device also recognized pre-set contacts, letting the child know if it's "Mom" or "Dad" calling, and so on.

As mentioned earlier, GizmoPal 2 allows you to track your child's location more or less in real-time. We say more or less because some parents have complained that there is a slight delay in some of the watches.

Whether or not this constitutes a deal-breaker depends chiefly on the reasons you needed the watch in the first place. Still, bear in mind that others say real-time tracking works well, although it may take a few minutes to locate the child.

GizmoPal 2 has a few basic pre-set text messages that the child can use to communicate with their caregivers. As some parents have noted, one downside is that the watch doesn't offer the possibility of writing your own messages, so text communication may be a bit limited. As for the parent's text messaging possibilities, it seems there is a 30-character limit per text, which again some people found very limiting.

A much-appreciated feature of the GizmoPal 2 is the ability to program “to do” reminders, to make sure your child doesn't forget soccer practice or some assignment. Since many parents are using these devices for this specific purpose, in a way, this makes up for the messaging limitations.

GizmoPal 2 is rated as IP67, which means it is water-resistant, but not waterproof. An IP67 rating implies that the device can sustain a splash of water, but not be submerged, so it must be taken off before swimming/showering.

The device allows the child to switch between different watch faces, depending on the child's mood. It does tell the time, and it also has a function that tells the time out loud, if the child holds the “Call” button for a few seconds.

The Gizompal 2 is somewhat limited when it comes to child entertainment, in that it only offers a few basic games for your little one. But if your main purpose is tracking and calling, then this should be alright. The watch also has a “Fun Sounds” function, through which it emits all sorts of amusing noises to keep your child entertained.

The GizmoPal 2 also allows the child to convert a written message into a spoken word through a text-to-speech function that reads the message in a funny voice.

In today's highly sedentary world, it's important to make sure children get enough activity each day. That is made easier by the built-in pedometer the watch has, which allows the primary caregiver and the child to track total steps and monitor other fitness activities.

However, one major downside of the GizmoPal 2 is that it does not come with a camera. In the age of the selfie, many children want to imitate their elders and crave the ability to take photos and record videos. Sadly, the smartwatch doesn't have that ability, which some children may find frustrating.

Once again, it depends on what your primary motivation for buying the watch is.

Lastly, the watch allows your child to activate certain functions (e.g., calling or reading messages) through voice commands, both practical and entertaining.

Parental Controls - What Are You in Charge Of?

Parental controls are a critical feature of any smart device intended for a child. Even though the GizmoPal 2 can not connect to the Internet, and as such, is already somewhat safer than other smart devices, it's still important to be in charge of your child's digital exposure.

The automated answer feature is one of the most impressive on the GizmoPal 2 watch, in our opinion. After 10 unanswered rings, it allows the watch to pick up automatically, thus allowing you to hear the sounds around your child, and make sure they are not in danger. We ought to mention that you need to turn it on beforehand in the device's settings for this function, but it's well-worth-it for your own peace of mind. What's more, you control the auto-answer function, not your child, so you can listen in if you're so inclined.

The GizmoPal 2 also allows you to log into the device's activity log and view any calls made or received, sent and received text messages, as well as games played. This function allows you to make sure your child isn't distracted by the device in school and ensures their safety. However, this feature is only available to the Primary Caregiver, and not to the other 3-4 pre-set contacts.

From a parent's perspective, the GizmoPal 2 is great because it allows the child to have their own phone number and only some of the associated responsibilities. It's a great way to teach your child to be responsible for electronic devices and award them some independence, while also keeping them safe.

One last important aspect that needs addressing is the battery life, which by all accounts seems to be fair, though not outstanding. As with any device, the battery life will depend heavily on the functions activated and usage. On average, the GizmoPal 2's battery seems to last about a day or so with moderate use (about 40 hours with no use). This means you will have to charge it fairly regularly, but considering that many phones are in a similar situation, it's a pretty good deal.

LG also offers the GizmoGadget (discontinued, as well, but available in retail). Like the GizmoPal 2, it is a smartwatch aimed at children with red or blue bands. The GizmoGadget allows children to access two-way calling from up to 10 pre-set numbers, as well as choose from 9 pre-set text messages to send out. The GizmoGadget also allows GPS tracking, thus ensuring your peace of mind.

While the GizmoGadget seems to have all the essential functions that the GizmoPal 2 does, it also has a few extra. It has a compass that allows the child to orient themselves, a timer and stopwatch function, and also a control panel that allows them to access the device's settings.

As such, the GizmoGadget is fairly more advanced than the GizmoPal 2, so it may be more well-suited for older kids.

However, one major disadvantage is that the GizmoGadget seems to be a lot pricier on the retail market.

The two GizmoWatches have a basic calling, texting, and tracking functions and come equipped with cameras. They also tell the time and allow the child to change the home screen image, so they're definitely more advanced.

What's more, the GizmoWatch 2 even offers geofencing (so that you get an alert if your child leaves a specific pre-set area). As can be expected, though, both the plans for these, as well as the devices themselves, are pricier.

If you're looking for a basic tracking and calling device, we tend to lean toward the GizmoPal2, especially for younger kids. If, however, you want a more entertaining option, one of the two GizmoWatches may be a better choice.

No, the GizmoPal 2 only works with Verizon.

No, the GizmoPal 2 is rated as IP67, which means it's only resistant to water, but not submergence.

At this time, it's unsure whether LG will put down a GizmoPal3, as they haven't issued a formal release date.

Yes, the GizmoPal 2 is compatible both with Android (4.0 or higher) and iOS (7 or higher).

Bottom Line - Is the Gizmopal 2 Worth It?

Yes, the GizmoPal 2 is a very good, if a bit basic, a smart device for tracking your child's location and keeping in contact with them throughout the day. Much as we love the GizmoPal 2, however, we wouldn't really recommend it since it has been discontinued. Instead, if you're looking for a Verizon-compatible device, you might want to check out other devices, such as the GizmoWatch. If you're looking for a more in-depth review of other Verizon-compatible smartwatces for children, we suggest checking out our detailed article on the topic.

However, suppose Verizon compatibility isn't a must for you. In that case, you might be interested in looking at smartwatches for children like the TickTalk 3 (not on Verizon, but an excellent device).