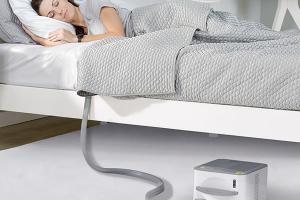 Health-o-Meter's Nuyu Sleep System is a product that claims to help you achieve a night of better and more comfortable sleep. If you have problems sleeping or experience issues such as insomnia, then you know how important it is to achieve a comfortable, good night's sleep. Here we cover all you need to know about this product before you buy it.

We discuss the features and functions of the Nuyu Sleeping System, including features like sleep tracking and monitoring the temperature changes throughout the sleep cycle that was exclusive to its smartphone app integration with the product.

In the end, I recommend other products that are similar in function or purpose as an alternative to buying the Nuyu Sleep System online as it is only available through third-party retailers and has low user reviews on Amazon.

The details and benefits described are based on claims originally made by Health-o-Meter, and the pros and cons of the product are based on user reviews.

The Nuyu Sleep System was released in 2015 after a successful crowdfunding campaign on Indiegogo and promised to provide its users with a revolutionary way to achieve sleep. On the product's Indiegogo page, the product claims that 65% of Americans sleep less than 8 hours a night and that 56% experience restless sleep. Here are some of the benefits that users have experienced when using the Nuyu Sleep System:

The product features a machine-washable mat that offers custom temperature controls and runs off of a water-based system. The mat itself is made with an ultra-soft cotton/polyester blend designed to be undetectable when placed beneath the sheets of your bed.

The temperature-based pad is designed to simulate your body's natural circadian rhythm and help in moderating your body temperature while you sleep. Set-up for the Nuyu Sleep System is a simple 4-step process:

You can also track your sleep to better calibrate your custom temperature needs using the Nuyu app. The app identifies temperature recommendations that the app tracks while you sleep by connecting to your Nuyu Sleep System using your Bluetooth-enabled smartphone.

Users can rate the quality of their sleep each morning, and early field tests showed a 1-star improvement in sleep ratings based on a 5-star rating system within the app.

To properly feel the benefits of the Nuyu Sleep System, they recommend that you use it a few times first to give the product time to calibrate to your unique body and sleep patterns.

Other sleep systems tend to be significantly more expensive than the Nuyu Sleep System, which currently sells on Amazon for $250. Other products that boast similar results can sell for anywhere ranging from $499 to $799.

Although you can purchase Nuyu Sleep System online, there are some downsides to the product itself. Health-o-Meter, the company that designed the Nuyu Sleep System, no longer sells it on its website, so you will have to go to other third-party online retailers to purchase it, such as Amazon primarily. The company does, however, have a contact form for Nuyu product inquiries on their website.

The Nuyu Sleep System's water tank also needs to be replaced regularly with distilled water, and the pumps and fan produce noise that can be irritating to some. The system is also limited to smartphone users to control the temperature and track adjustments to temperatures while you are sleeping, so old school phone users are out of luck.

Other users have reported that the Nuyu Sleep System has helped them to stop waking up in the middle of the night due to overheating and have had a positive experience integrating the app and noticing a difference after the first few days.

What Other Users Think?

The online reviews for the Nuyu Sleep System are quite split down the middle, though the product's cheaper price tag might make up for some of its shortcomings. There are some concerns that since the company itself no longer sells the product that some sleep systems being sold no longer go through quality control and must be shipped through third-party retailers, such as Amazon or eBay.

There are several other products on the market that are similar to the Nuyu Sleep System that claims their products are higher quality but come with a sometimes much steeper price tag. Even with the cheaper price, since Nuyu Sleep System appears to be discontinued, I would not recommend this sleep system over the alternatives.

Some alternatives to the Nuyu Sleep System include Chili Technology's chiliPAD or the more advanced featured Ooler Sleep System, which both use a water-based temperature system similar to Nuyu Sleep System. The chiliPAD is offered in multiple sizes from twin to California king and comes with a remote control to control the temperature.

Another feature of this product is that you can purchase models that are designed for two people instead of one, and each side of the pad has separate temperature controls and comes with individual remote controls. The Ooler sleep system is the more advanced sleep system that includes smartphone control and the ability to set sleep schedules. It also includes a self-cleaning UV lamp that automatically cleans water, so you don't have to keep replacing it as often.

The BedJet system offers an air-based temperature control system that boasts as a more effective and safer alternative to electric blankets. The system does not require any water or additional set up and works by pulling cooler air in the room to the sleeper and offers a dual-zone temperature system independent of manual control. The BedJet system is the more expensive1 reviews.