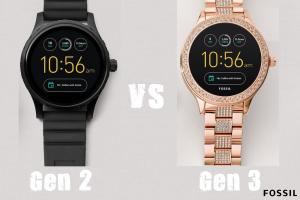 Fossil attempts to make a name for themselves in the smartwatch arena with their Gen 2 and Gen3 models. Today, we'll be going over the features, pros, and cons of both the Fossil Smartwatch Gen 2 and Gen 3 so you'll have an easier time choosing.

When it comes to Fossil's Gen 2 Smartwatch, the differences present in each of its three variations are a matter of attention to detail. The hardware associated with the Founder, Wander, and Marshal versions are all basically the same, distinguishable by subtle differences in casing and style.

Dependent on which Fossil Gen 2 model you choose, the smartwatch's metal cases are available in silver, black, or rose gold color options. For added customizability, each model features 22mm interchangeable bands which can be switched out.

Fossil has always been well-known for producing watches that cater to the fashion conscious, and this remained the same in regards to their smartwatches.

In looking at Fossil's Gen 2 and comparing it to other smartwatches from competing brands, you can see a stark difference in design.

The Fossil Gen 2 doesn't necessarily look like a smartwatch upon first glance but does it operate like one?

Unfortunately, Gen 2 excels in style and lacks in the fancier features one has come to expect in a smartwatch- like fitness tracking ability.

On the level of more basic features, the Gen 2 smartwatch does offer some degree of fitness tracking by providing reports of daily movement, distance travelled, and the number of calories burned.

Without GPS features, however, this smartwatch does little more than any basic pedometer.

Although there are fitness tracking features present in Fossil's Gen 2, there is some controversy in terms of accuracy.

Without a heart rate monitoring function, for example, the watch's calorie burn feature has to be taken at face value.

One of the more advanced features in Gen 2's arsenal is its smart notification functionality. Using an internal microphone, a Fossil Gen 2 user is able to answer texts and receive notifications without pulling their phone from their pocket.

While this is an important addition to the Gen 2 smartwatch, it is hardly unique.

Smart notification technology is fairly commonplace in today's smartwatches, and Gen 2 falls behind in one way in particular- you can't answer calls from the watch unless you're an Android user.

That's right. If you own an iPhone, you'll miss out on one of the most popular features found in modern-day smartwatches.

Still, if you can overlook this, it's nice that you can be notified of emails, texts, and reminders without having to look at your phone.

Fossil aims to offer an even further degree of user customization in the form of customizable watch faces. These watch faces are available for download through Fossil's smartwatch app, but in reading reviews, I did find a few complaints.

See, Fossil's smartwatches are Android Wear devices. While this labelling doesn't classify the Gen 2 as a watch exclusive to Android users, there are some serious problems in functionality that iOS users will face. One of these issues lies within watch face customization, as I found in one Amazon review from an iOS user.

The user states that an iPhone user is going to experience a diminished user experience in regards to the Fossil Gen 2. She cites an inability to change watch faces via her iPhone as one such issue going on to recommend that an iOS user stick with the Apple Watch.

Further Reading
We dive into the advantages and disadvantages of owning a smartwatch in this article.

What Does Fossil Gen 2 Offer in Specs?

Let's start with that all-important question: What is the Fossil Gen 2's battery life like? Well, not so great in terms of smartwatches. Powered by a single lithium polymer battery, most users report battery life of about 24 hours.

I even found some instances of battery life reported to be as short as 8 hours by some users. While it seems that some of the reports of shorter battery life apply specifically to iPhone users, I don't see this as an excuse.

The Fossil Gen 2 is marketed toward Android and iPhone users alike, and such deviations in performance should be nonexistent.

While this is dependent upon the amount of direct use and certain settings, it's a disappointing find nonetheless.

The Fossil Gen 2 hangs its hat primarily upon being a daily tracker and should, in doing so, offer more than enough juice to power through a complete day.

Luckily, the Gen 2 is wireless charging compatible so that the charging process is easy- something that seems especially important as you'll likely be charging it often.

It seems that, overall, reviewers weren't all that impressed by what Gen 2 brought to the table in terms of screen quality. I found multiple reviews complaining of very apparent wash out when viewing the screen at an angle as well as grainy resolution. It seems that these problems are due to a transflective LCD display and low resolution.

Another common complaint is in the "flat tire" look situated at the bottom of the screen. This prevents the watch face from appearing as a full circle which can prove bothersome to some users in terms of functionality. This particular issue is a matter of preference and will not be a dealbreaker for all potential buyers but is worth noting.

Fossil Gen 2 smartwatches are available in only one band size with a wrist circumference of around 7.5 inches.

User reviews are overwhelmingly positive in regards to the comfort level allowed by the size of the Gen 2 smartwatch.

Most user reviews state that the watch has a solid weight on the wrist without feeling too heavy.

This makes the Fossil Gen 2 smartwatch feel of premium value in combination with its fashionable design.

The Availability of the Fossil Gen 2 Models

Currently, the Gen 2 models are still available for purchase through Fossil's website in refurbished condition.

If you're looking to pick up any of these three models (Wander, Founder, or Marshal), there is still some variety in color and band material left to choose from.

They are also much cheaper now than they were at $109 as compared to the launch price of $255.

You can also find Gen 2 models available for sale online through sites like Amazon or eBay.

Further Reading
You don't have many options if you are in search of a smartwatch for a small wrist. Check out this article to find out some of your alternatives.

By making some improvements, Fossil offers a smartwatch with more to offer in the form of the Fossil Gen 3- but is it enough?

Each model features its own unique case colors and band materials which include options such as luggage leather, black silicone, and stainless steel to name a few.

Gen 3 takes the design of its predecessor and expands upon it with subtle design changes including a wider variety of color variations.

The "flat-tire" display that the Gen 2 was notorious for is gone, and screen quality has been dramatically improved.

While as stylish as ever, I was especially interested to see whether or not the same care was taken in regards to upping the Gen 3's features and specs.

Is this new generation just as all-talk and no action as Gen 2?

There were issues present in Fossil's Gen 2 that desperately needed to be addressed if Fossil hoped to make any lasting impression on the smartwatch market. It seems likely that Fossil can make a sale based upon style alone for some- but to reel on the broader smartwatch audience, they would need to expand in terms of features and specifications in Gen 3.

I think it is best to touch only briefly on Fossil Gen 3's features as unfortunately, no great leaps have been made, and many of the recent issues persist.

Don't worry though- Fossil Gen 3 does exceed in terms of specs which we'll discuss later.

More of the Same

If you're looking for a smartwatch with all the fitness tracking bells and whistles, look elsewhere. Fossil has retained fairly basic fitness tracking features in Gen 3 and excluded the additional features their customers were asking for.

Gen 3 users will again miss out on fitness tracking features available from Fossil's competitors including a lack of heart rate monitor or GPS functionality.

There are no major changes or improvements in terms of Smart Notifications either. Much like Gen 2, Fossil's Gen 3 smartwatch utilize Bluetooth technology to make receiving notifications from your smartphone a bit easier.

You will receive notifications such as texts, social media alerts, and email without the ability to answer calls directly through the watch if you have an iPhone.

Finally, iOS users will still experience a lesser degree of customization options in their ability to change watch faces as no improvement has been made in this sense.

Up until this point, you may have been questioning what exactly makes Gen 3 any sort of an upgrade at all. Fortunately just when all seemed lost, Fossil expanded and improved in terms of specifications, at least.

The most significant improvement found in Gen 3 is found in screen quality. As I stated earlier, the flat tire plaguing Gen 2 has been removed from Gen 3, but the changes don't stop there.

This newer generation also supports a higher resolution screen at 454 x 454 pixels with the inclusion of a brand new AMOLED display.

There also appears to have been a significant improvement in brightness ensuring you won't be squinting to view your notifications.

With additional sensors (both ambient light and optical sensors), the Gen 3 is able to sense lighting changes in the environment around you and adjust the brightness accordingly.

These changes bring a much more user-friendly experience to the Gen 3. Whether viewing the display at an angle or in direct sunlight, there's a noticeable difference in graphics that are sharper and more vibrant with minimal washout effect.

Another satisfying feature that sets Gen 3 apart from the less impressive Gen 2 is the inclusion of three buttons located on the right side of the watch.

What do these buttons do, you ask? They offer the chance for improved navigation and customizability!

Users can set functions to these buttons based upon their own preferences. From scrolling to dismissing notifications to viewing, you'll have a simplified experience with the Gen 3's interface.

We've gone over all of the more prominent features and specs present in Fossil's 2nd and 3rd generations of smartwatches and made comparisons. So who wins the battle?

While Fossil's Gen 3 doesn't go all the way in fixing the obvious issues presented by its predecessor, it can't be denied that it is an altogether more complete smartwatch.

It's still far from perfect with a number of features missing that smartwatch competitors like Apple, Samsung, or FitBit supply in bulk but Fossil's Gen 3 excels in style.

It's a premium looking watch that just looks expensive. Unfortunately, it seems that Fossil focused heavily on what they do best (design) and left out all of the other essential components that make a smartwatch, well, smart.

Fossil Gen 4 - Is There Hope on the Horizon?

But wait! Don't count Fossil out yet. Generation 4 is here, and it appears that Fossil is ready to get serious about smartwatches.

From a brand new heart rate monitoring system to improve fitness tracking functionality to GPS capabilities, the Gen 4 seems to have finally found the perfect balance between fashion and hardware.

While there have been no notable improvements in terms of battery life, charging time, or iOS connectivity, the confirmed changes in the Gen 4 means there may be hope for Fossil yet.

I'm interested in checking into this newest generation even further to see what other features it provides, but at face value, at least, it seems that it may be time to take Fossil more seriously.

The Best Smartwatches for Small Wrists

The DZ09 Smartwatch Review– Is It Worth Buying?