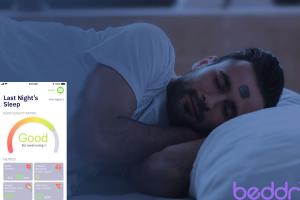 Beddr's SleepTuner makes the same promises as to any other sleep tracker on the market today- with a twist. With over 1 billion people suffering from sleep disorders such as sleep apnea worldwide, sleep tracking technology is in high demand.

If you're like me, you want to consider all of your options. SleepTuner claims to do more than your average sleep tracker, and I wanted to find out just how much. Is SleepTuner worthy of your purchase? Let's find out.

At first glance, Beddr's SleepTuner looks like something out of a science fiction movie. Weighing virtually nothing and only about the size of a postage stamp, SleepTuner takes sleep tracking technology to a unique place- your forehead. Initially, I was skeptical of Beddr's design choice. The thought of attaching a sleep tracker to my head before bed each night was uncomfortable, to say the least- but I had to know more.

Luckily for sensitive sleepers like me, Beddr kept user comfort in mind during the design process. SleepTuner attaches to your forehead with a medical-grade sticky pad, ensuring that it stays in place all night without keeping you up.

Still not convinced? Many current SleepTuner users have reported that they experienced no added discomfort when using the device. While you're not going to forget it's there, SleepTuner keeps sleep tracking as non-invasive as possible.

Setting up SleepTuner for the first time is straightforward and hassle-free. All you have to do is download Beddr's iOS-friendly app on your smartphone and sync it to SleepTuner. After that, you're ready to put it to use. SleepTuner will record data each night and deliver reports to your phone the next morning.

I was surprised to see that Beddr actively promotes SleepTuner as an FDA-registered sleep tracker. Your average consumer may assume that FDA-registration status means that a product is somehow more reliable, but this isn't the case. Registering a device with the FDA is an easy enough process, and it's essentially like saying that your product is on the waitlist for FDA-approval. In an effort to provide an un-biased review of SleepTuner, I felt this an important fact to provide.

So why the forehead? As it turns out, the forehead is an ideal spot for capturing all of the vital data SleepTuner needs.; Similarly to other sleep trackers, SleepTuner takes measurements of things like blood oxygen levels, sleeping position, and breath and uses it to generate helpful reports. Let's get more in-depth with the features of Beddr's sleep tracker.

One of the leading causes of sleep apnea is stopped breathing during sleep(also known as obstructive sleep apnea or OSA).

SleepTuner is designed to catch these incidents as they happen by measuring the body's blood oxygen levels via SPO2 tracking(Blood Oxygen Saturation).

SleepTuner also makes use of its built-in accelerometer and tracks sleeping position- a primary cause for stopped breathing events. I found this to be one of the more impressive features in Beddr's sleep tracker. It can be challenging to identify stopped breathing events as you usually have to spend thousands of dollars to participate in a sleep trial. Could Beddr really do all of this from the comfort of your own bed?;

While looking for positive reviews of this unique feature, I noticed that SleepTuner customer feedback is currently in short supply. As SleepTuner isn't available for purchase in common online methods like Amazon, I had to resort to reading a few reviews present on the SleepTuner app on iTunes.; One user states that SleepTuner's measurements of stopped breathing events seemed accurate and enjoyed getting results from the comfort of their own bed. This user even says that SleepTuner's SpO2 tracking alone was well worth the purchase.

This is the feature that Beddr bases SleepTuner around and with good cause. By rating your sleep quality and finding just how often you experience stopped breathing events, it can help you pinpoint your unique issues and seek medical help.

With night after night of regular use, SleepTuner records and uses data to not only give you a better picture of your sleep quality but also learn more about you in order to provide more accurate data.; Aside from taking measurements of things like oxygenation, heart rate, and sleep duration, SleepTuner also takes note of more personal data.

Each night, SleepTuner will record data such as the time, whether or not you've had a drink, and your current fatigue level. It then uses this, in addition to more technical data captured while you sleep, and generates user-friendly reports.

Sure, the data that is captured while you sleep is eye-opening in itself, but I especially liked that personal factors were taken into account for SleepTuner to create a better overall picture.

User-Friendly But Not Without Issues

The SleepTuner app is incredibly easy to use and guides you step-by-step. I can appreciate an app that does the hard work for you and found that SleepTuner definitely does. I also especially liked that the app requires no constant connection to your smartphone. This enables the user to turn their phone off at bedtime, ridding them of one of the larger distractions to a good night's rest. So long as the device is turned on and active, SleepTuner will collect data.

It should be said, though, that the app is not without issue. In looking through iTunes reviews, one user reported "constant data loss" with their device. It seems that this user would frequently get "network connectivity errors" from SleepTuner during the upload process regardless of the fact that they had a strong WiFi connection. If this were a rare occurrence, I could overlook this review as a possibly defective device, but the user reports that this issue occurred multiple times.

In another negative iTunes review, a user describes the app's visualizations as "bad" and points out that the app is far from a "perfectly polished product." He also expresses frustration in the fact that the app does not store data locally, causing the app to run pretty slowly.

While these are just two examples of negative reviews on the app's performance that I was able to find, I feel them important to mention as they are two of the three featured reviews on SleepTuner's page in the iTunes app store. While I did not go through every single review, I did notice that SleepTuner currently sits at an average rating of 3.6 stars.

It also goes without saying that one of the significant drawbacks of SleepTuner is that it is currently available to iPhone users exclusively. If you're an Android user, you will, unfortunately, have to look elsewhere until Beddr decides to make SleepTuner available to a wider audience.(Beddr plans to release an Android version towards the end of 2019 )

Can You Trust SleepTuner's Findings?

With all that SleepTuner promises its wearer, it is incredibly crucial that the device delivers accurate findings. I was interested in finding that, unlike many of the sleep tracking devices on the market today, Beddr seems to have scientific evidence to support SleepTuner's accuracy.

In a study conducted by the University of California San Francisco's Hypoxia Lab, Beddr says SleepTuner's SpO2 sensing was found to have a margin of error +/- 2.2% when measured alongside an arterial blood draw. Considering that the FDA's allowable error of margin for medical devices stands at +/-3.5%, these are impressive results.

When it comes to questioning the validity of sleep apnea monitoring devices on the market today, there is a common lack of scientific proof. The fact that SleepTuner offered at least some form of evidence of its accuracy was comforting. You can find out more about how sleep trackers work here.

If you've done your due research and decided that SleepTuner is the best choice for tracking your sleep quality, you're probably interested in where you can pick up your own. Well, as it turns out, SleepTuner can currently be purchased in one place and one place only- Bedder's website.

SleepTuner will cost you a retail price of $149. Included in the box are the device itself, a protective case, quick start guide, 12 hypoallergenic adhesives, and USB-C charging cable and adapter.

I found the idea of paying over the price of the device itself for any long-term amount of adhesives to be a bit of a turn-off; At the time of writing this review, however, it appears that Beddr is offering a sale price on adhesives so now may be the best time to purchase if you want to avoid the high prices.

Beddr offers a 14-day money back guarantee with the purchase of a SleepTuner as well as a 1-year warranty.